Alberto Chavez, but everyone calls me "Tito"

Playing soccer, learning English, and hanging around with my cousins.

Being too little for things, and sometimes being left out!

Me – because I'm tagging along for the ride!

Alberto "Tito" Chávez is a character in Maya & Miguel who is Maya and Miguel's seven-year-old cousin who moved to the U.S. from Mexico with his parents. He lives in the same apartment complex.

He admires his cousin Miguel. He admires Miguel so much that he even tried to copy him, to Miguel's flattery, in the episode I've Got to be Miguel. He also looks up to Maya and sometimes gets shy without her around. He loves to play soccer and is a big fan of a wrestler named El Guamazo Lopez, (Gus Lopez) the "greatest luchador" from Mexico City. Tito is voiced by Candi Milo & Mike West.

Tito is a small Hispanic boy with tan complexion, dark brown hair and blue eyes. He is usually seen wearing a green T-shirt, beige khakis and red and white sneakers.

I just moved here from Mexico. Do you have a question for me?

Tito with his older cousin Miguel

Tito trying to sneak away from Miguel

Tito next to Maggie

Tito with his cousin Maya

Group Picture With Kylie As The Loud House/Casagrandes Characters 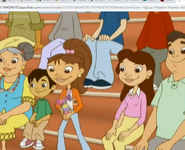